What is the difference between A1 and A2 milk 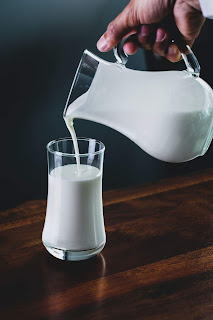 At present, there are two types of cow's milk available in the market, A1 and A2 milk. The majority of cows that are being raised are A1 variety. A2 cows are the earlier breeds of cow.

A1 versus A2 milk

Milk is great source of calcium and protein. Casein is the largest group of proteins found in milk which makes up about 80% of the total protein content. A2 cows are the earlier breeds of cows like the desi Indian cows or the African cows that produce this protein in their milk along with an amino acid called Proline. In the new hybrid breeds, the proline amino acid got converted to Histidine due to alteration of genes over the years. These are the A1 cows that include breeds like Holstein, Friesian and Ayrshire.

Proline is strongly bonded to a small protein called BCM7, which prevents it from getting into the milk produced by A2 cows. On the other hand, Histidine holds a weak bond with BCM7, so it is easily released in the GI tract of animals and can enter the human body on consumption of milk from A1 cows and interact with the digestive system and internal organs. A2 beta-casein is protein found in milk produced by 'old-fashioned' cows like the Jersey, Charolais, Guernsey and Limousin. Milk produced by other mammals such as those from human, goat and sheep is similar to A2 dairy milk mainly due to the presence of proline.

Operation Flood, launched in 1970, was a project of india's National Dairy Development Board(NDDB), which was the world's biggest dairy development program. The white revolution was that it led to cross-breeding with European cows and import of foreign hybrid breeds of higher yield in order to meet the goal of mass production.

This has brought to a situation today where the old Indian breed cow has become a dying breed in India. Imagine this - The Gir cow, Which is Gujarat's(Indian province) breed, is now being imported from Brazil and the Brahmi Bull, Which is another pure breed, is more popular in Australia.


“Our first food is the water, the milk which planet can't feed except mother”
-William Foege